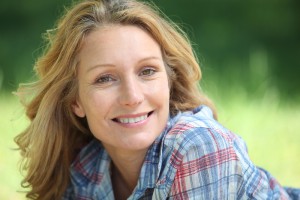 When patients come to see our plastic surgeon, Dr. David L. Durst, about their facial appearance, some patients will have a somewhat droopy appearance to the forehead or the eyebrows. Many patients who have what they believe to be excess skin in their upper eyelids will in fact have a low brow position. Sometimes this is related to their natural appearance, which they inherited from their parents, and sometimes it may be related to aging changes. In both situations, typically a brow lift can improve a patient’s appearance.

When Dr. Durst examines a patient who is considering this surgery, he will look at the individual from the standpoint of which component is causing the eyes to look tired. If the brow position is low, he will recommend a brow lift procedure. If the problem is actually redundant skin in the eyelids he will suggest a blepharoplasty (eyelid lift procedure). Sometimes patients need both at the same time to get the best possible appearance. After a brow lift procedure, often the eyes will look more open and the face will look more awake.

When Dr. Durst examines the patient for brow lift he will often recommend different techniques based on what will work best for the individual. In some situations, an endoscope will be used to perform the brow lift procedure, which will be inserted through very small incisions in the hair. In other situations, a more extensive elevation will be necessary, and a larger incision will be used that will be camouflaged in such a way as to make it as unnoticeable as possible. Both of these procedures often can result in very dramatic changes to the appearance.

The surgery will be done with general anesthesia in our office surgical suite. Typically, the operation will be performed as an outpatient unless the patient is having several other procedures at the same time. There is some swelling after the brow lift procedure, but the soreness generally will be mild and will be easily treated with medication for just a few days. Most patients can return to work within a week to ten days after brow lift surgery. Activities usually can be resumed after a couple of weeks.

When you have brow lift surgery, Dr. Durst will see you several times in the first few weeks after surgery to monitor your progress and make recommendations as to how to get the best possible healing. Patients who have brow lift surgery are generally very surprised about the degree of rejuvenation that this surgery can accomplish for them.

If you would like to make an appointment to discuss a possible brow lift procedure, please contact our Huntsville office.